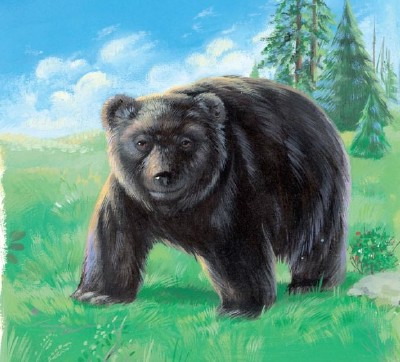 As summer draws to an end, Mother Bear roams through the mountain forest, gathering and eating enormous amounts of berries and fruit. Mother Bear is putting on fat so she can sleep in her den the entire winter. The layer of fat will keep her warm and help her provide rich milk for the baby bear that will be born.

The air is turning cold. Mother Bear must hurry. She still has a lot of work to do. She must find a home for herself and her baby.

Mother Bear chooses a rocky cave to be her den during the winter. Inside the den, she and her baby will be protected from the cold wind and blowing snow. She pads it with moss, leaves, and grass to make it warm and soft for herself and the new baby.

As the first flakes of winter snow begin to fall, Mother Bear settles down and drifts off to sleep. Soon the falling snow will build up outside and close off the den, keeping Mother Bear and her baby safe from harm.

In the middle of winter, when the snow drifts are deep outside the den, Mother Bear’s tiny cub is born. With closed eyes and hardly any fur, the cub will grow quickly, nourished by Mother Bear’s rich milk. 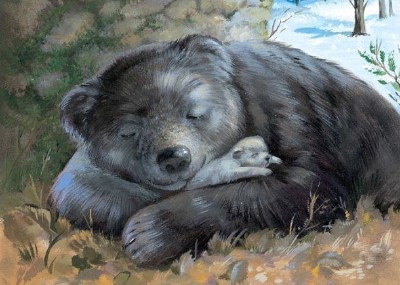 Baby Bear and Mother Bear sleep on, but Mother Bear will wake up and protect him if the winter home is disturbed. Mother Bear sits or lies on her side in her den and keeps her cub warm by cuddling him close to her warm body.

In a few weeks, Baby Bear’s eyes open. He is now covered in thick, soft fur. Mother Bear and Baby Bear stay in their snug den another month.

Bear cubs will stay in the den for three months before they venture outside. During these three months, they spend most of their time sleeping. They wake only to drink their mother’s milk.

In the spring, Baby Bear and his mother emerge from the den. Mother Bear shows Baby Bear how to look through the forest for tender shoots that will make a good meal. 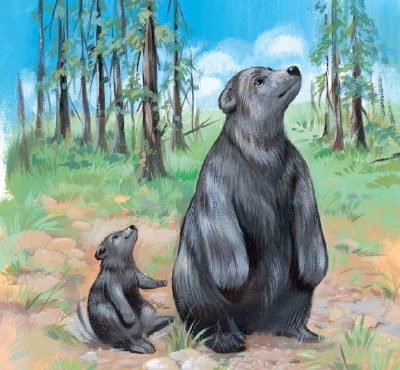 Mother Bear makes her way with Baby Bear down the grassy slope to the elks’ winter range. She lifts up her head and sniffs the breeze. Baby Bear moves his raised head back and forth so hard that he falls right over.

Bears have such small eyes that people often assume they also have poor eyesight, but bears probably see as well as most humans. Mother Bear finds an elk that died in the winter when the snows were deep and not enough food could be found. Mother Bear eats as much as she can of the nourishing elk meat. Then she carefully buries it in a shallow hole and covers it with leaves, twigs, and dirt. She will return to it later.

Baby Bear learns by watching what his mother does. The most important rules for Baby Bear to learn are to follow mother, obey mother, and have fun.Bear cubs stay with their mother about two years. During this time, they learn many survival tips, such as what to eat and how to escape danger, before they venture out on their own. 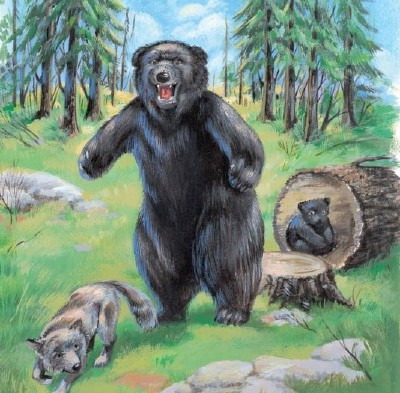 Mother Bear teaches her baby cub to turn over fallen branches and look for grubs to eat. With their long, sharp claws, Baby Bear and Mother Bear dig up bulbs, roots, and snails.

Bears will eat almost anything they can get their paws on, including grasses, berries, tree bark, plants, insects, some small mammals, and, of course, sweet honey!

When his mother stops to rest, Baby Bear likes to play. He climbs all over her. He somersaults into her lap and nibbles her ears, then runs off to chase a tiny field mouse.

When Mother Bear looks up from playing with her cub, she sees that a lean wolf is watching her and Baby Bear. Quickly she chases the cub into a hollow tree stump. Then she turns to face the wolf. 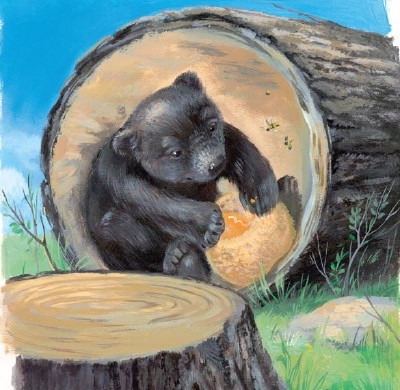 Mother Bear stands up on her hind legs, swings her front paws, and roars a loud growl. The wolf runs away.

Bears have five claws on each foot. They use their front paws for catching and holding prey, digging for insects and roots, and climbing trees.

Mother Bear calls to her cub, but he doesn’t come out of the hollow stump. Mother Bear goes to find out why. Baby Bear has found a treat. It is a honeycomb with honey from last summer still inside. Baby Bear sticks his little paw in the honeycomb and then licks it. He tastes the wildflowers of summer in the sweet honey. 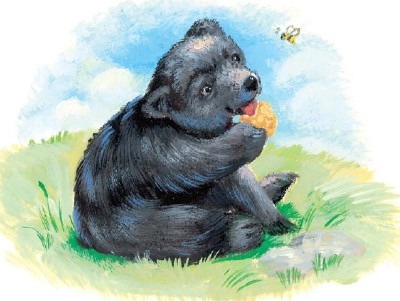 As Baby Bear’s first summer draws to an end, he is able to find his own food, although he might drink milk from Mother Bear occasionally. Now he must eat as much food as he can to prepare for his winter sleep. When Baby Bear backs out of the hollow log, he brings some tasty honeycomb for his mother. She happily eats the honey, and then she and her cub give each other a true bear hug. 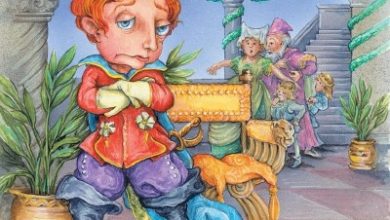 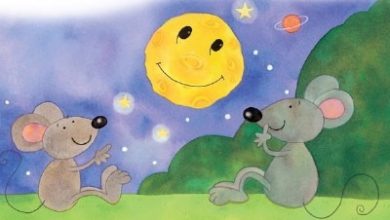